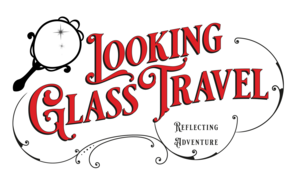 Hi, my name is Christina Armstrong. I live in Branson, MO with my wonderful husband and our four beautiful children. We love experiencing life together as a family! Our unofficial family motto - lifestyle, really - is "we have fun!" Sometimes that may look like having a dance party in the living room while cleaning up toys, and other times it may be going on an exciting vacation and experiencing the world outside of our hometown.
I have been fortunate to experience a wide range of traveling in my life. The following are some highlights from trips I have been on: seeing the sites on a tour through Europe, riding gondolas through the Swiss Alps, seeing the Mona Lisa at the Louvre, taking a double-decker bus tour through London, swimming with dolphins in Tortola, going up in the Eiffel Tower, building sand castles in Cozumel, whale watching in Alaska, sky diving in Wisconsin, riding thrill rides on the roof of the Stratosphere in Las Vegas, visiting zoos and aquariums across the United States, seeing the beautiful gardens in Barbados, seeing some of the most beautiful beaches that the Bahamas and Caribbean have to offer, whitewater rafting in Colorado, standing on THE LEDGE in Chicago's Sky Deck, being in a huge float for a parade at Universal Studios while in high school, eating Mickey pancakes at Disney World as a child, and seeing the look on my children's faces when they saw Cinderella's castle at Magic Kingdom for the first time.
As a mom of four littles, I have most recently enjoyed learning about all things Disney! Since 2014, we have been on two Disney cruises and to Walt Disney World twice! Our Disney trips were incredibly magical. In addition to the trips themselves, it was so much fun looking forward to these trips with our children! We watched Disney movies, counted down the days, talked about all the fun things we would be doing. Once it was over, we wanted to go back!
Now, I must touch on cruising, because it's FABULOUS! The cuisine, entertainment, the destinations, the service, etc. I was first introduced to cruising with Princess cruises. In 2008, we went on a cruise to Alaska for our honeymoon. I was sold! Cruising is simply amazing! We went on another Princess cruise in 2009 to the Caribbean. Then we took our children on two Disney cruises in 2014 and 2015. I am looking forward to our first Royal Caribbean cruise in 2018!
Sometimes planning a vacation can be overwhelming, and I am here to help you with that process. Vacations should be fun! Thank you for allowing me to help you and anyone you refer turn ordinary moments into magical memories!
"To live will be an awfully big adventure." ~ Peter Pan